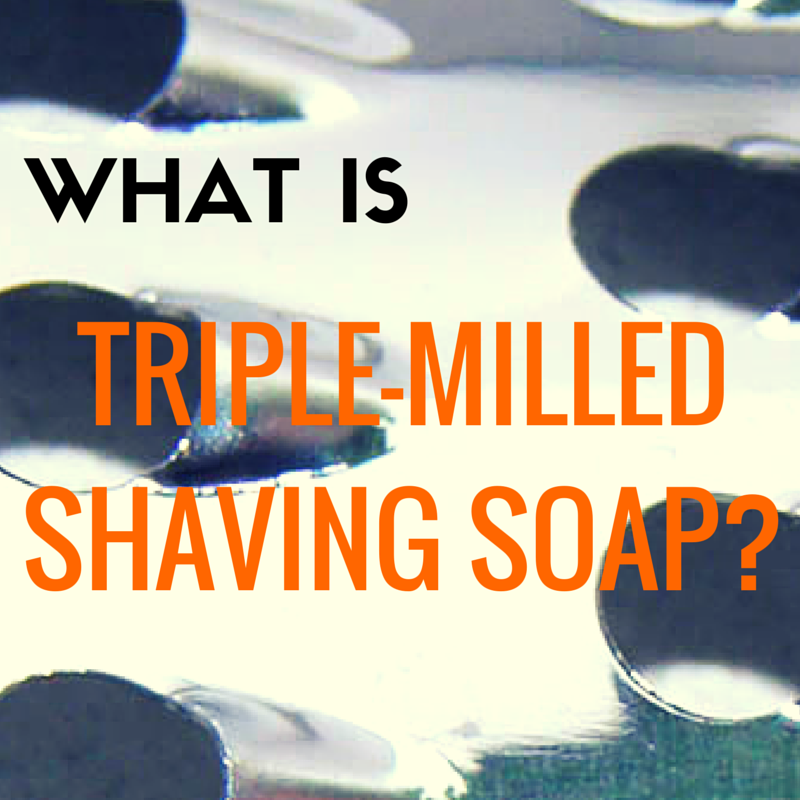 Have you ever seen a fancy looking soap that boasts ‘triple-milled!’ and wondered if it’s actually better, or just a buzzword?

Maybe you make your own soap, and you’ve wondered about the process of triple milling soap and whether it’s worth your time?

What Is Triple Milled Shaving Soap?

Triple-milling is actually quite a simple process.

Creating a homemade triple milled soap involves grating the finished soap, melting it back down, and pressing it into a new bar or puck.

Commercial soap manufacturers use a specialized machine to do this, but you can also hand mill at home with a good old cheese grater.

If you’re unfamiliar with soap, you’re probably wondering why anyone would do such a thing.

A lot of factors influence a soap’s quality – especially a shaving soap, where a small improvement in the shave can put you head and shoulders above other soaps out there.

One of these factors is the amount of water left in a bar of soap. The more water that has evaporated from a finished soap, the milder and better it will be.

For this reason, many soap makers leave their soap to cure for weeks or even months. Of course, if you’re in the soap business, it can be hard to manage a huge inventory of curing soap batches.

If orders are coming in for a particular soap, and a business owner must decide between sacrificing sales or compromising a little on the cure time, you can imagine that some people might opt for the latter.

The customer would have no way of knowing. Besides, it’s never good to have a lot of money tied up in inventory.

Milling a soap allows the curing process to be hurried along. The water is evaporated quicker through grating and reheating.

Triple milled soap is just soap that has undergone this process three times.

Milling produces a better product in less time. Any cure time after milling is just a bonus.

Milling has other benefits, too.

Melting the soap back down allows you to mix it up again. This makes the soap more consistent throughout and prevents pockets of certain ingredients.

Plus, while the soap is melted down, you have another opportunity to add colorants, fragrances or superfats.

Superfatting during milling might even be preferable to superfatting in the original recipe. If you’ve measured your ingredients correctly, the lye in your soap will have been used up during saponification, leaving your precious superfats untouched.

Using the soap milling process, you can make your soap more uniform, speed up curing, and get more out of your superfats.

If you’re using a milled soap, benefits include a more consistent and higher quality product. As a bonus, there is less water in the soap, so gram-for-gram you’ll get more uses out of it. Of course, this will usually be offset by the higher cost of a triple milled shaving soap.

Oh, and just for the record, triple milled soap isn’t constrained to the shaving world. There are plenty of regular milled soaps out there, too.

There’s an important distinction to be made when asking if triple milled shaving soap is better:

Triple-milled soap is better than the same batch of soap if it had never been milled.

If the soap you’re starting with wasn’t good to begin with, it’s not a matter of milling it until it is.

Garbage in, garbage out.

Milling improves soap like frosting improves cake. If you make your cake out of ground rice, water, and some stuff you swept off the kitchen floor, all the frosting in the world won’t help you.

One exception might be if you’re adding superfats, but if you’re doing this to try and salvage a truly awful batch, you could be better off cutting your losses.

You should also keep in mind that milled soap is harder because of the lost water. For a shaving soap, this means that it will take a bit longer to load on to a shaving brush than if it wasn’t milled.